Certified laughter yoga leaders training with Alex Sternick, the initiator of Laughter Clubs in the Land of Israel. B.Sc. in Clinical Nutrition.

Bring laughter and positive thinking into your life.
Develop a sense of humor and creativity.
Lead groups and clubs to make people laugh and laugh because it’s healthy.
To learn how to laugh while feeling bad in order to feel better.

The course will emphasize the importance of taking life less seriously, adding playful childlikeness from a health perspective and give tools for how to do this both individually and in a group. Alex’s work takes the laughter of one’s authentic self; stop being a victim of circumstances, and instead embrace growth and self-empowerment purely for health reasons.
Participants in the certified laughter yoga leaders training  will receive all the tools to facilitate Laughter Groups. 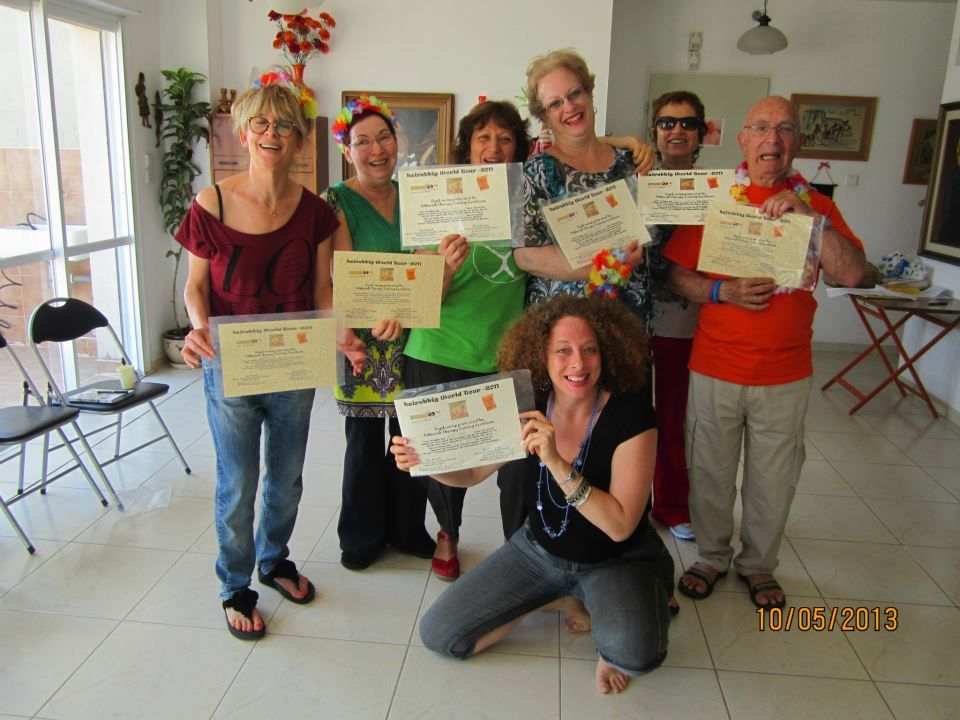 Laughter Yoga is a method that allows each of us to laugh for no reason, without being dependent on humor or jokes. But to laugh at will!

In Laughter Yoga, laughter is unconditional, as little kids laughing so suddenly, for no reason.

To practice it we need a group that laughs together using eye contact, as a form of exercise. And gradually and naturally, laughter is stimulated from a trickle to a fountain and becomes contagious, similar to the laughter of a newborn.

Today, you can find in the Western world and in India about 5,000 laughter yoga clubs, some of which operate every day and some less often. Laughter is known to improve the immune system, releases endorphins, reduces stress, lowers blood pressure, stimulates the cardiovascular system, reduces shyness, enhances the development of creativity, playing and improvisation, improves interpersonal relations, helps resolve conflicts, and enhances self-image and confidence.

In this course, you will be trained as a Laughter Yoga Leader and you’ll be able to guide seminars and instil the values of Laughter Yoga and Therapy to the general population. After completing the technical and theoretical parts, a certificate will be awarded as authorised by Dr Madan Kataria.

The course emphasizes the development of creativity and imagination through fun exercises and is therefore very suitable for people who specialize in theater and any form of expressive arts. Special emphasis will be on Gibberish Techniques.

We will take the laughter yoga concept to deeper places like “Playing With Nonsense” or how to stop being a victim of circumstances – with the regular practice of Cathartic and Mirthful Laughter. We actually understand one thing:  the world is a theater where “anything goes” and we have the choice of acting as victims or victors on the stage of life.

The curriculum: – What is Laughter Yoga?

– How and why laughter is beneficial to health
– Facilitation of Laughter Yoga Workshop and Laughter Meditation
– Laughter Yoga and Pointless Games (practical)
– The joy of everyday life  – inner essence of laughter
– How to open a laughter yoga club?
– Laughter physical dimension, emotional, spiritual, social and mental
– The role of leader
– Back to childhood through specific exercises
– Dealing with problems and objections during the workshop
– Working with special groups
– Dealing with the victim state of mind through laughter and nonsense
– Gibberish Therapy and sublimation of negative emotions through it
– Mimicry and pantomime as stimulants to create more laughter

What will you receive as a graduate of  Laughter Yoga Leaders Training?

–  Option – extending your sessions beyond the first initiation requires payment of    an additional fee.

Applying for Leadership Training requires a personal interview on the telephone and a brief discussion of expectations of the course.

After the course: Personal and professional guidance by telephone and sending your work for assessment.

Who is Alex Sternick?

Alex has been reclaimed as “Laughter Ambassador” & “Gibberish Man” for the year of 2006 by Dr Madan Kataria, Laughter Yoga Founder for his work among Jews and Arabs through Laughter. Alex is an international lecturer and facilitator in the field of Gibberish Therapy. “Playing with Nonsense” travels all over the world to spread the message and the concept. In his work with the Palestinians, Alex focuses on the role of Laughter in peace-building, inner peace and boosting up the vital forces by releasing the past. Alex bills himself as a “health-oriented peace activist”.

On December 2009, after realizing a vision that he planned and developed over a period of six years , Alex arranged and organized the visit of World  Laughter Master Belachew Girma (who holds the longest record for non-stop laughter) from Ethiopia. Alex has trained and certified Leaders in the ART OF NONSENSE and Laughter Yoga  around the world: The U.K., Itay, France, Japan, USA Finland, Austria, Germany, Netherlandsand many more.

For more information about courses, workshops and lectures.